Career options for women were limited in the 1890s when Edith Tyrrell was introduced into Canada’s fledgling mining industry as the young wife of Joseph Burr Tyrrell. He was a renowned explorer and map-maker with the Geological Survey of Canada (GSC) when they met, and often away on long expeditions. By the time they married in 1894, Edith Tyrrell had studied geology and experienced the separations endured by many mining families. In Toronto during the first world war, she recognized the need for the wives of mining men to support each other. In 1921, she and 19 like-minded wives launched the Women’s Association of the Mining Industry of Canada (WAMIC). Since then WAMIC members have overseen the distribution of more than $1.8 million in charitable donations and support for students and educational institutions. It is fitting that a century later Edith Tyrrell be inducted into the Canadian Mining Hall of Fame, joining her husband who was inducted in 1997 for his career accomplishments. 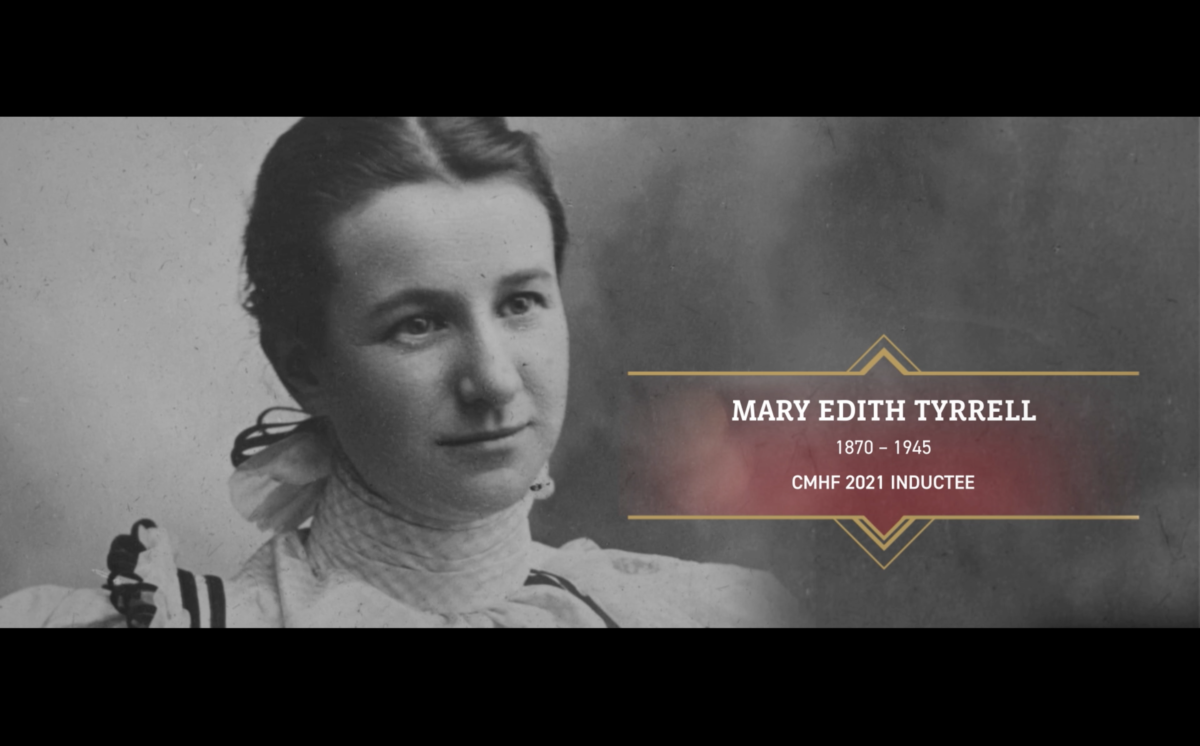 Mary Edith Carey was born in Saint John, New Brunswick, and nick-named “Dollie” as she weighed only three pounds at birth. She was not strong enough to attend school, but spent considerable time in the family library as her father, a Baptist minister, believed in the higher education of women. After 17 years in Saint John, the family moved to England, where Edith attended high school. Six years later they moved to Ontario, where Reverend Carey was appointed to the First Baptist Church of Ottawa. It was there that Edith met her future husband, who a few years earlier had discovered dinosaur bones and coal deposits in Alberta.

The Tyrrells raised three children and travelled extensively during their marriage, including to the Yukon during the Klondike gold rush.  In 1905, they moved to Toronto, where he could further his business as a mining geology consultant. She witnessed mining history by his side as major discoveries were made in northern Ontario and across Canada.  During the war years she joined the Women’s Auxiliary of the American Institute of Mining and Metallurgical Engineers and saw the need for a similar group in Canada.  In March of 1921, she gathered together 19 other mining wives to launch WAMIC. Its objectives remain to promote friendship among mining women, render service to the mining industry, and contribute to the well-being of the community.

Mrs. Tyrrell served as WAMIC’s president for its first three years. Members supported worthy causes that mirrored the times; war veterans in the 1920s, schools and disaster relief in the 1930s, and the war effort in the 1940s. Over the past century WAMIC has donated more than $300,000 to various charities, awarded more than $300,000 in scholarships and bursaries, and overseen the distribution of $616,000 to deserving students from the Sophia Wood bequest. Another $600,000 was distributed to several universities and the KEGS Foundation as the WAMIC Foundation wound down in 2010.  WAMIC has supported countless students over time, including women and minorities, and helped the mining industry in its transition from a fraternity into an inclusive community.