The career path of Robert Quartermain encompasses several distinct phases of success, starting with a pivotal role in the discovery of Ontario’s Hemlo gold camp in the early 1980s. He began his career as a geologist for Teck Corporation and gained rare and valuable experience at Hemlo and other mines. In 1985, he was recruited to manage Teck’s associated junior and mid-sized companies. Among them was Silver Standard Resources, which he grew from a market cap of $2 million into a global silver miner valued in excess of $2.5 billion. In 2010, he ventured on his own to form Pretivm Resources, based on an unshakeable belief that its high-grade Brucejack prospect in northern BC had the makings of a mine. His faith was validated when Brucejack became Canada’s fourth largest gold mine with annual production of 350,000 ounces. 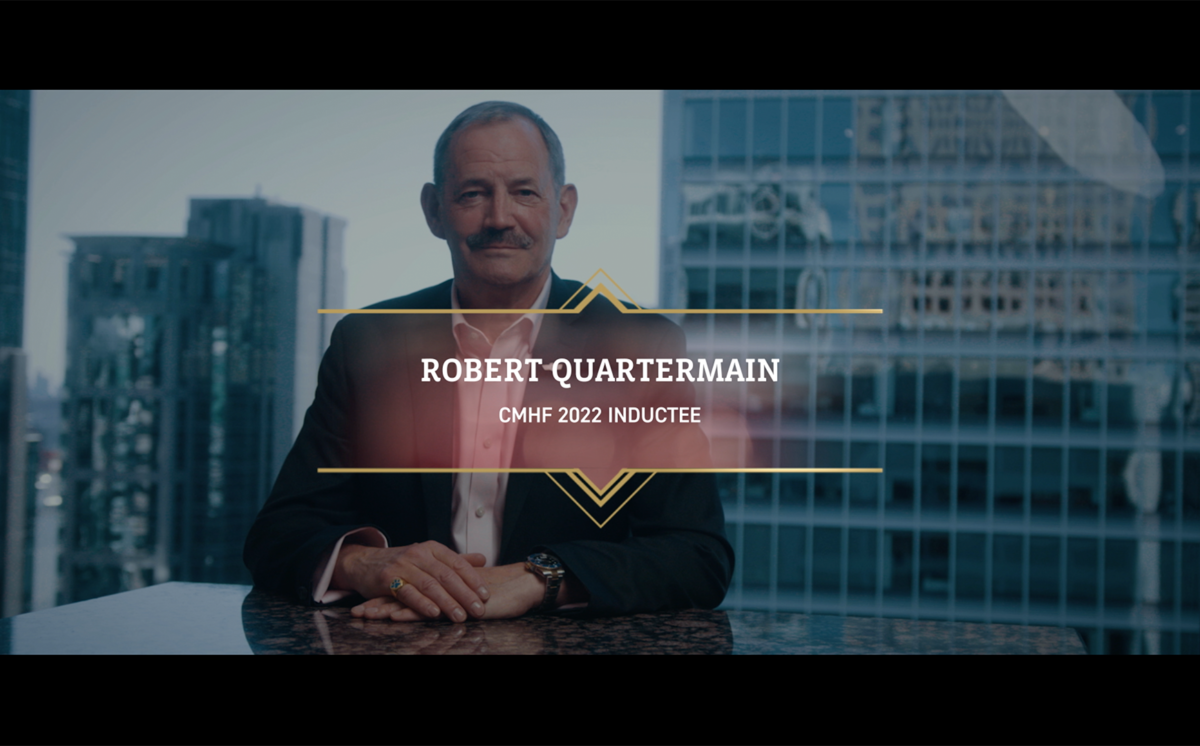 Quartermain is a longstanding advocate for Indigenous involvement in the resource industry and a generous philanthropist with a focus on education, social justice and wildlife habitat preservation. His social conscience has deep roots from his childhood in St. Stephens, New Brunswick.  He learned leadership skills as a young RCAF Air Cadet and in 2019 was appointed an Honorary Colonel in the RCAF for his support of the Canadian Armed Forces. Quartermain graduated from the University of New Brunswick with a BSc (Honours, Geology) in 1977, and later remembered his alma mater with a $1-million contribution to its Earth Sciences Department (now the Quartermain Earth Science Center) and funding for research and 6 geoscience scholarships.

Quartermain joined Teck in 1981, after earning his MSc (Mineral Exploration) from Queen’s University. He was assigned to manage exploration drilling of the Corona gold prospect at Hemlo and outlined the deposit that later became the David Bell mine, the first in the camp. He saw similar potential at an adjacent property and urged Teck to option it; however Teck was outbid by Noranda, which developed it into the Golden Giant mine. Quartermain was then transferred to Vancouver as President of Silver Standard Resources, where he put together a strong exploration team. Their ability to discover or acquire quality assets impressed Teck and he and his team were tasked to manage other Teck affiliates including Western Copper Holdings with its initial focus into Mexico leading to the San Nicholas discovery, and Mutual Resources/Golden Knight Resources which acquired a minority interest in the Tarkwa Gold Mine in Ghana. Silver Standard meanwhile through strong shareholder financial support was able to acquire a joint-venture interest in the Manantial Espejo mine, and developed the Pirquitas Mine, both in Argentina, while advancing many other silver projects such as Silvertip, San Agustin and Pitarilla.

After building Silver Standard (now SSR Mining) into a major silver focussed producer, Quartermain focused his attention to forming Pretivm Resources and acquiring the Brucejack property in BC. He and his team negotiated agreements with First Nations and raised US$540 million to construct a 3,800-tpd mine. Brucejack has been profitable since it commenced commercial production in July of 2017.  From a geological concept to Canada’s fourth largest gold mine in a decade is a testament to his skills as a geoscientist and company builder. Quartermain has received many awards over the years, notably MABC’s Mining Person of the Year (2017), CIM’s A.O. Dufresne Award (2016) and Vale Inco Medal ((2010), PDAC’s Bill Dennis Award (2013), AME BC’s Murray Pezim Award (2009) and an Honorary DSc from UNB (2009).